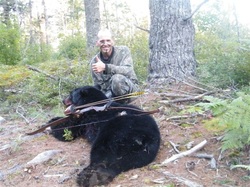 I guess that's as good as place as any to start. First some backround. Like many of you, I began hunting and travelling the woods with my father at a young age.  First came small game. Then big game.  But something stirred deep in my hunters heart. I wanted to leave footprints outside of my home Province of Nova Scotia. The mountains, barrens and fields of distant places tugged at my soul. And so it began. At the young age of 19 I booked my first outfitted hunt at a fly in camp. And my hunters journey began and has not stopped to this day.
Over the course of 30 some years I have worn the hat of hunter, client, outfitter and guide. Between hunts I have been honored and privledged to serve as both Vice-President and President of the Bowhunters Association of Nova Scotia. I am proud to have served as the Vice President of The Nova Scotia Bear Hunters Association as well. I have, and currently, belong to many small local hunting clubs as well as several big well known Associations and Federations. I have also served as a Pro Staff advisor for a couple companies.
O yes, back to the Bea part of my introduction. About 20 years ago I began guiding for black bears. The outfits name was Bears East Adventures. So, when the internet and hunting forums became so popular, I signed in as bearseastadventures. That was a rather long "handle" so , when other memebers would type my name, it became the shortened Bea. And it stuck!
Glad to meet you!